In 2021 THT’s Micro Theater festival was back live at Goodwood Museum and Gardens. On August 6th and 7th 2021, the audience enjoyed a series of 15 to 20-minute plays written by Hispanic playwrights, performed in English. Some of these plays were presented in English for the first time, and one of them was an adaptation of a Mexican short story by a local writer. If you miss the festival, you can still watch the show here.

Due to Covid-19 restrictions, in 2021 our 3rd Micro Theater Festival was online. The three plays were filmed at the beautiful Monticello Opera House and are still available to watch here.

In the Summer of 2019, on June 21-22, THT celebrated its Second Annual Micro Theater at the Carriage House in Goodwood Museum. The festival presented a series of 15 to 20-minute plays written by Hispanic playwrights, performed in English.

In addition to the plays, the audience had the opportunity to enjoy drinks and Hispanic food provided by Tally Arepas (available for purchase), and live Hispanic music throughout the event. On Friday night As Saudades played Choro and Brazilian/Latin American music, and on Saturday Charles Santiago performed Hispanic guitar music.

These are the plays that were part of the festival.

Mother Love by Almúdena Grandes: this fiercely parodic monologue (originally a short story) tells, from the perspective of an apparently exemplary mother, a black tale about the disintegrating relationship between a mother and a daughter. Directed by Alejandra Gutierrez and performed by Erika Stone.

A Mommy and a Daddy by Ignacio del Moral’s is a lively, and somewhat melancholic dialogue through which two people, a man and a woman, find each other and express their longings while they take their respective babies for a stroll. Director by Mattie Ward and performed by Jen Davis and Andy Guthrie.

A Night in the subway by Paloma Pedrero: Late at night, in a deserted subway station, a man and woman meet and have a conversation. “Sometimes, random encounters with a stranger can surprise us, and we learn as much about them as we do about ourselves.” Directed by Lanny Thomas, and performed by Sonia McNelis and Jacob Durrance.

Castings by Cristina Colmena: An actor and an actress meet at a casting where both of them are auditioning for the same part. “This comedy plays with the old metaphor of Life/Theater just like Pirandello did but with a comic undertone.” Directed by Angel de Armendi, and performed by Carolina Merida and Jessi Martin.

Capricho by Nilo Cruz: a forgotten understudy waits in vain for his call, still in his costume for some long-ago Lope de Vega play. “Foolish and forlorn, he’s a leftover trouper, and old-world soul doing a ten-minute vaudeville turns on the virtues of standing by.” Directed by Beth Blair, and performed by Alan Kagan.

In the Spring of 2019 THT presented Navigators, by Toni Cabré, a hilarious comedy about two people who believe in the virtues of social media. A man and a woman get online to find out what’s happening, to share their feelings, to have fun… Maybe because of they are online, they feel less isolated and somehow happier. But online relationships are very complicated!

Like many of us, the two character in Navigators are lonely. They want to break out of their routine, so they navigate the web to find someone else who wants to play a game.

Our show during the Fall of 2018, Happily Ever after, consisted of three short plays framed by two monologues, reflecting on love and its challenges. The short plays, Misunderstandings, Don’t Take it Personally and Melodrama present couples in different stages of a relationship, portraying their romantic struggles, fears, and insecurities, hurdles anyone surely can relate to. The two monologues An Ugly Boyfriend and Perceptions give us the insight into the minds of two women struggling with jealousy and self-doubt. These pieces of dark comedy, written by Spanish playwright Cristina Colmena, present in an amusing and incisive way the complicated patterns love relationships are made of.

Tallahassee Hispanic Theater embraced the concept of Micro Theater, started in 2009 in Spain, presenting a group of short plays  performed in the same space: the Carriage House at Goodwood Museum. Micro-theater is a form of theater very popular these days in Spain, Latin America and places like Miami and New York. It brings short stage performances up close to the audience in unusual venues.

Besides the plays, the audience had the opportunity to enjoy drinks and Hispanic food,  and  live music, interpreted by Charles Santiago and Jesse García.

This was a non-traditional theater event, where the audience was able to enjoy the setting, the music, and the performances presented all in the same open space, while moving freely around the space and mingling with others. These are the plays presented:

“Blind Date”, by the Argentinian playwright Mario Diament, is inspired by the writings of Jorge Luis Borges, an acclaimed Argentinian poet, essayist and short-story writer. The play tells the story of an elderly blind man who draws confessors to him as he sits on a park bench. They discuss mid-life crises, time, love, fate and missed opportunities while addressing universal human concerns. 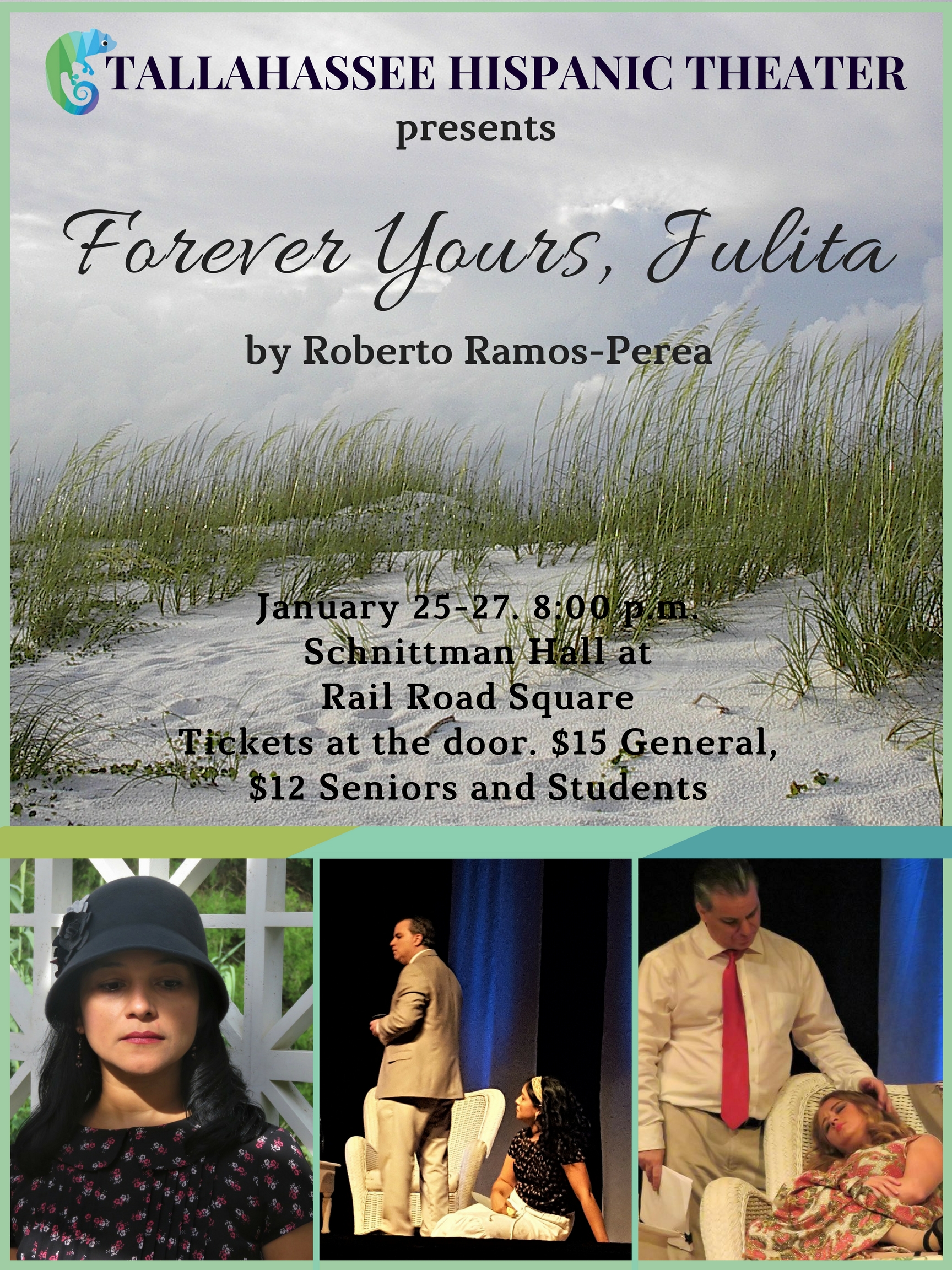 This play deals with important issues of artistic integrity, male/female roles in Latin American society, and Puerto Rico’s relationship with the United States.

The play begins in 1914. Julia is 19. She has written her first book of poetry and is seeking recognition. That night she attends a party given by a well-known poet, Luis, who is celebrating an important prize he has won. Luis receives the young woman who gives him a copy of her book of poetry to obtain his opinion. A no-holds-barred relationship starts up between them: disciple, political enemy, rival poet and lover.

A puppet show telling the wonderful story of Don Quijote de la Mancha in his journey to protect the world.

The importance of stories and their power to change our lives are celebrated in this Pulitzer Prize-winning play by Nilo Cruz.The play is set in 1929 in Ybor City, a section of Tampa, and the center of the cigar industry. When Cuban immigrants brought the cigar-making industry to Florida in the 19th century, they carried with them another tradition. As the workers toiled away in the factory hand-rolling each cigar, the lector, historically well-dressed and well-spoken, would read to them. In this story, the lector reads Anna Karenina by Leo Tolstoy, sparking the characters’ lives and relationships to spin out of control.

This is the only play Lorca wrote for children. It’s the tale of a poor shoemaker’s daughter and a lovesick inquisitive prince. The play is based on an old Andalusian story. “Federico Garcia Lorca, one of Spain’s greatest poets and playwrights, brings us a delightful fairy tale that speaks of the importance of treating others with respect-particularly those we love.” David Mellinger, author of the book García Lorca, Federico, 1898-1936.

The first project of THT, Nights of Ephemeral Love offer three stories that explore different traits in human relationships: the struggle for power, the effects of cruelty, the paradox of loving and hating at the same time and the intensity of the feelings that two people experience at various stages of their relationship. With a touch of humor and vivid language Pedrero presents an acute look at modern relationships and our constant desire for human connection. 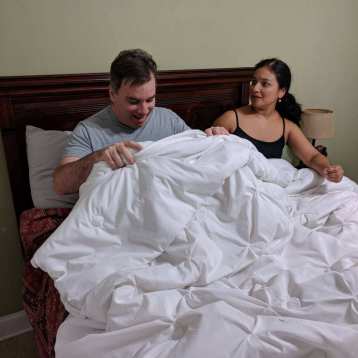